Theo and Helen Bosch (Grandparents to Diane Whitley) began a market garden in south St Vital in 1940, where they were part of the original North End Market, selling vegetables and Gladiolas.

In 1951 Red Valley Greenhouses was founded by Theo and together with his wife Helen they became the first Chrysanthemum growers in Manitoba.

In 1965, their daughter, Julie, and her husband Dan formed Riverside Greenhouses. From there they continued growing Mums, bedding plants and Poinsettia crops.

From an early age Julie and Dan’s daughter, Diane, and her brother worked in the greenhouses along with their parents. In 1991 they assumed ownership and continued Riverside Greenhouses until 2013.

In 2014 Diane, and two of her sons, Tyler and Colin, started Red Valley Plant Market, reincorporating the original Red Valley name under which they proudly grow what they sell and are excited about being a part of your neighborhood. 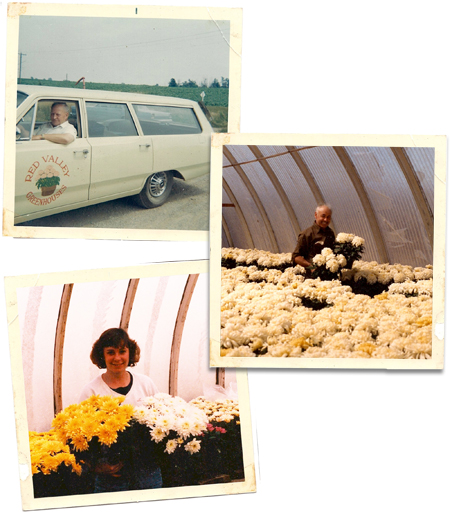